Mycotoxins are toxic chemicals produced by fungi, which typically contaminate crops. Mycotoxins can be fatal to both animals and humans at very small concentrations, usually parts per million or parts per billion. The fungi and molds that produce these chemicals are often times undetectable by the human eye and nose and feedstuffs should undergo mycotoxin testing to determine the presence or absence of the fungi. 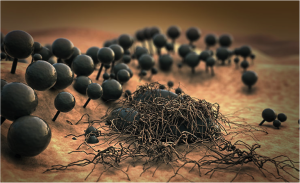 Some common mycotoxins include aflatoxins, fumonisins, ochratoxins, zearaleonoe, and vomitoxin and these can contaminate cereal grains such as corn, wheat, rye, etc., peanuts, hay, and other staple ingredients. It has been seen that mycotoxin contamination causes production losses at all levels of production and according to the Food and Agriculture Organization, at least 25% of the world’s crops are contaminated with mycotoxins.

Because mycotoxins are usually invisible, scentless, and tastless, it is important to test crops to protect your animals and the human consumer from illness. Here at Hiland Naturals, all of our feeds are subjected to mold and mycotoxin testing for aflatoxin and deoxynivalenol.